THE UNBEARABLE WEIGHT OF BEING SOBER 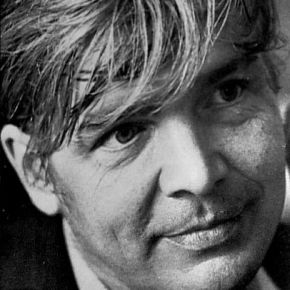 venedikt vasil'evich erofeev was born on october 24, 1938, as a second son of a stationmaster in zapolarje in the murmansk region. _a year after venedikt’s birth, father vasily abandoned the family. _venedikt’s mother could not provide for her offspring alone and sent her two boys to an orphanage in kirovsk

in 1946 during stalins's purges, father vasily gets rounded up and deported to the gulags for the alleged collaboration with the germans and the finns. _the family is reunited in 1954, when vasily is granted an amnesty after eight years of labour camp and returns home

despite all misfortune, venedikt was an excellent pupil. _since youth he showed an exceptional memory, an unusual erudition an a remarkable passion for literature. _at the age of 17, he already wrote his first fiction in diary form: zapiski psikhopat/= notes of a psychopath. _contrary to his rebellious attitude and his refusal to become an oktobrist, pioneer or a komsomol member, he finished high school in 1955 with a gold medal for his academic achievements

erofeev moved to moscow to study philology at the lomonossov-university. _he was expelled there after three semesters because he failed to attend the compulsory military training courses

in 1960, erofeev received a stipend to study educational theory at the vladimir institute. _after considerable time he was removed from the institute, because of his leading role in a group of activist students ánd the discovery of a bible in his bedside table

during his college days in vladimir, erofeev met valentina zimakova. _the fellow students fell in love, got married, but separated soon after the birth of their son vadim tichonov in 1966. _erofeev kept strong ties with vadim and frequently visited him in valentina's home in myshlino, near petushki

erofeev still tried to graduate from universities in orekhovo-zuyevo and kolomna, but he got expelled from both of them in turn for amoral behaviour/moral degeneration, terms more often applied to activists and freethinkers in those days

erofeev hit the bottle and started drifting on and off. _in the sixties and seventies he lived mostly without propiska/= identity papers or permanent address. _he worked, often underpaid, as a shop loader in kolomna, a bricklayer’s apprentice and a receiver of used wine bottles in moscow, a stoker in vladimir, a militia desk sergeant in orekhovo-zuyevo, a driller in a geological party in ukraine, a librarian in bryansk, a telephone cable layer in various cities of russia, ithuania and byelorussia, a laboratory assistant of a parasitological expedition in uzbekistan and karelia. _his commitment to literature remained unaffected. _in this period he wrote several articles about the norwegian authors knut hamsun and henrik ibsen. _he unsuccesfully submitted them to various literary magazines

early 1969, erofeev incorporated his experiences from those years, heavily coloured by his excessive drinking in his poem in prose moscow-petushki. _the first version in russian was published in 1973 in the israeli magazine ani. _it immediately made him famous throughout the world

in 1975 erofeev remarried galina erofeeva, who devoted herself to the conservation and the (initially underground) distribution of his manuscripts. _once his reputation as a writer was internationally established, he hardly got anything published in the ussr. _out of frustration he started learning german to have the opportunity to publish his work in that language

annoyed by the totalitarism of orthodoxy, the originally russian-orthodox writer converted to the church of rome in 1985. _he was baptized in the st. ludovico church, the only operating roman-catholic church in moscow at that time

in the last years of his life, erofeev suffered from throat cancer. _he received an invitation to come to paris for the treatment of his disease, but soviet authorities denied him an exit visa. _he died on 11 may 1990 in moscow and was buried at kuntsevskoe cemetery. _three years later his second wife galina commited suicide by jumping out of the window of her moscow apartement

in 1969, a samizdat/= clandestine edition of moscow-petushki was passed on in moscow's literary underground circles. _erofeev was the name on everyone's lips. _however, the first official soviet edition of moscow-petushki was delayed for 20 years. _early 1989 a first version of the text appeared in the magazine trezvost i kultura/= temperance and culture, with lots of censorship ellipses. _the more or less complete and uncensored text was first issued in the almanac vest’ in 1989

moscow-petushki -translated as moscow to the end of the line or moscow stations- is the deliric report of the narrator/protagonist venja, traveling by train from moscow to petushki, a minor station some three hours away from the capital. _the setting for moscow-petushki is the elektrichka, a suburban slow train that stops frequently at both idyllic-looking villages and towns laid to waste by industry. _it provides a space in which one can encounter the entire spectrum of society in motion. _mendicants, crippled soldiers and alcoholics roam its compartments and corridors

moscow-petushki was subversive in all its aspects. _with each passage erofeev opposed the officially mandated recipe of socialist realism. _the hero of the story is neither positive nor filled with revolutionary fervor to advance his country into the golden age of communism. _the protagonist is a sceptic, a decidedly antiproductive element in a society in which everyone is being told what to believe and where any doubt about life is equated with doubt about the soviet system

in 1988, moya malenkaya leniniana/= my little leniniana is published: a collection of lenin's quotations works and letters, which show the unpleasant parts of the leader of the proletariat

erofeev’s diaries were partly published after his death. _in 1992 the journal theatre issued erofeev’s letters to his sister tamara gushchina. _books by venedikt erofeev have been translated into more than 30 languages

ps | according to erofeev, in 1972 he wrote the novel shostakovich, the draft manuscript of which was stolen in a suburban train, together with a string bag also including two bottles of plonk/= wine of inferior quality. _in 1994 vladislav lyon announced that he had been keeping the manuscript all that time and would soon publish it. _however, only a small excerpt of the allegedly erofeev’s novel was published. _most of the critics consider it to be a fake