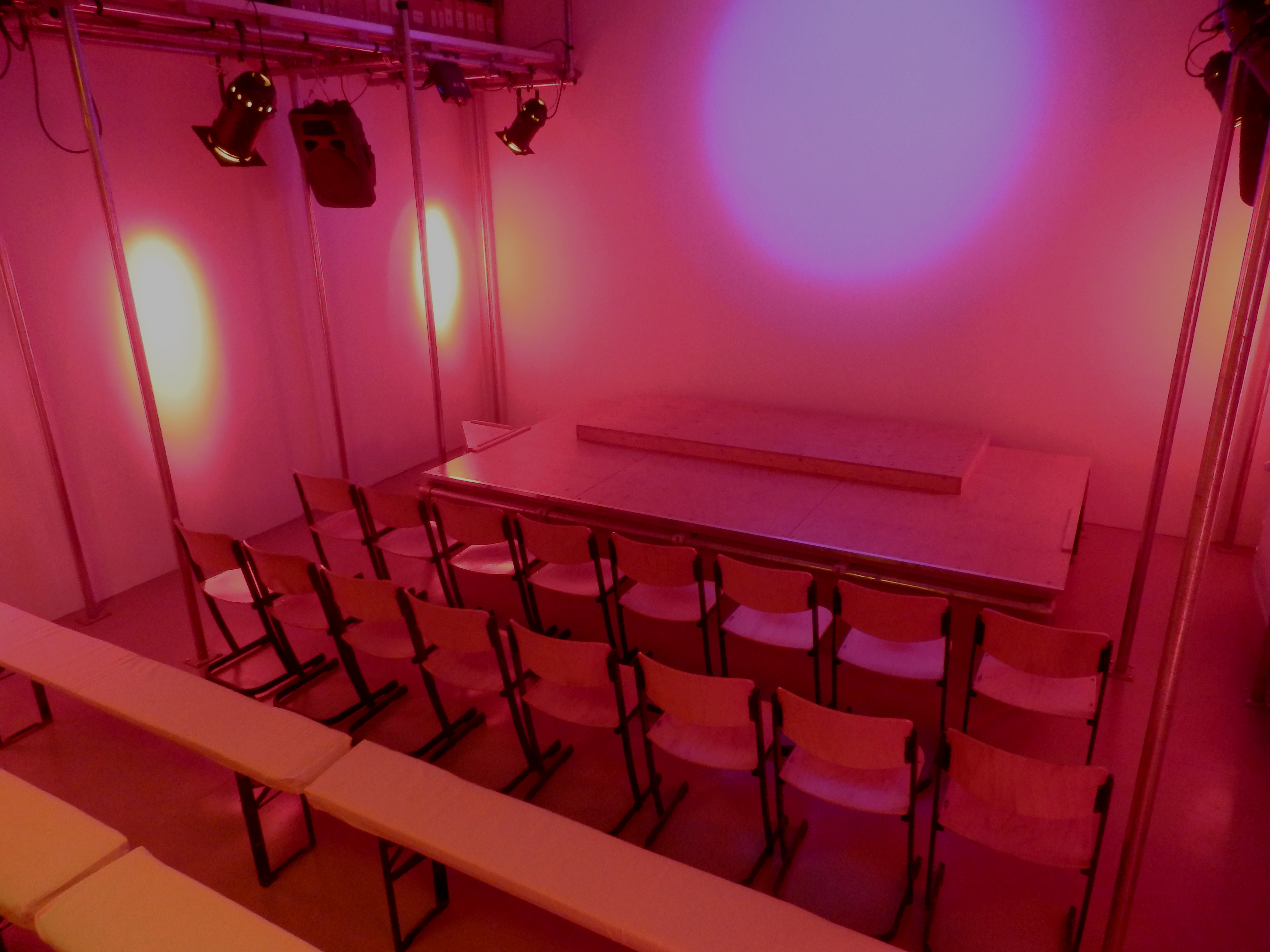 off-crimmp_cinema is an informative way of skipping evening school in a former class room at the drievriendenstraat, that is transformed into a movie theater. _the basic idea of the program curated by filmmaker noud heerkens is to show the work of rotterdam based video artists and filmmakers in an intimate and informal setting

this short documentary focuses on the research of acclaimed dutch neuroscientist floris de lange. _in his 'prediction lab’ he explores what expectations do with our perception. _inspired by the film 'robocop' in his teens, de lange became interested in the human brain and the question of whether you could reproduce it. _but when he realized that no one has ever succeeded to create artificial intelligence that can perceive as well as humans do, this became his first step in his research to understand our brain 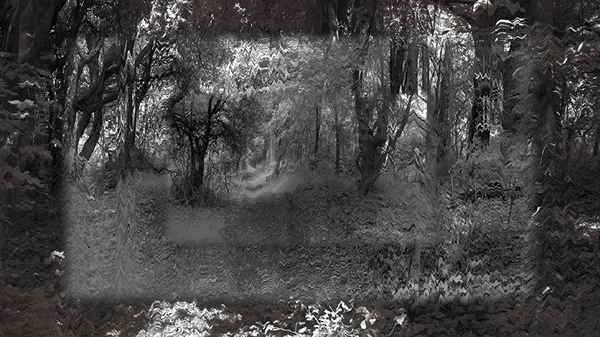 a warped stroll through a forest. _animated still photographs reveal movement and light on the forest paths that are otherwise invisible to the human eye. _van bakel made a ‘scanner-camera’ that extends human vision to near-infrared light in an other-worldly way. _what’s this thing called vision? _what’s the fundamental difference between what a robot discerns, what a flying insect detects or man’s observation?

inspiration: ‘wood’ is an old name for ‘forest’. _in the wood there are paths, mostly overgrown, that come to an abrupt stop where the wood is untrodden. _they are called holzwege. _each goes its separate way, though within the same forest. _it often appears as if one is identical to another. _but it only appears so. _woodcutters and forest keepers know these paths. _they know what it means to be on a holzweg. (from the preface to martin heideggers holzwege (off the beaten track), 1950)

human beings have absorbed technology at an unconscious level, such that they have come to operate through technology, as though by way of some tele-kinesis. _it is time, it would seem, to adopt a more flexible and tolerant attitude towards technology. _it is time to break free from the shackles of the past. _it is time, perhaps, to forget heidegger (neil leach in forget heidegger, 2006)

heidegger once stated that unless we question technology, ‘we remain unfree and chained to technology’. _a vision not shared by everyone these days. _in forest paths, especially by the way it unveils otherwise unseen aspects of ‘nature’ and the way the camera helps us interpret the forest, our interconnectedness to both technology ánd our natural habitat is disclosed. _through forest paths, van bakel hopes to raise wonderment and a greater critical awareness 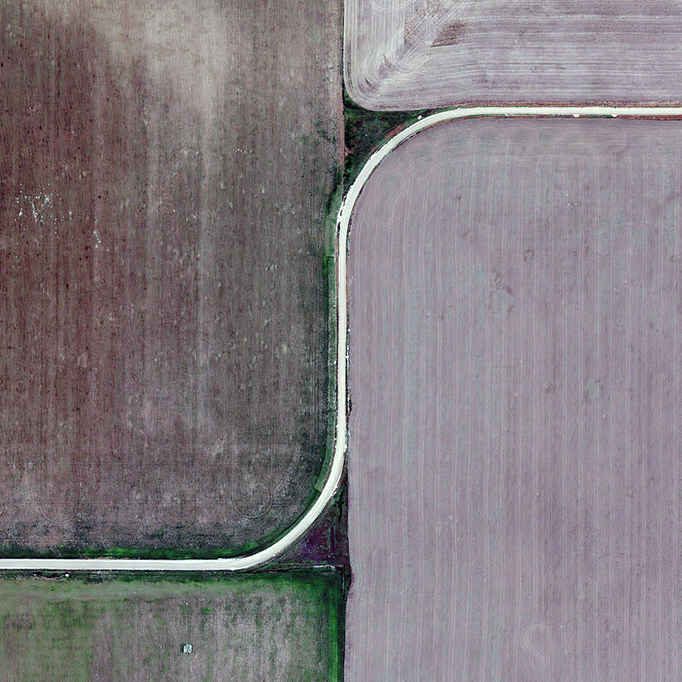 this film was made mining the thomas jefferson grid in google earth. _after the civil war in 1785 thomas jefferson established a grid-system in order to allocate the american west. _by superimposing a rectangular grid on the earth surface, a grid built from exact square miles, the spherical deviations have to be fixed. _after all, the grid has only two dimensions. _the north-south boundaries in the grid are on the lines of longitude, which converge to the north. _the roads that follow these boundaries must dogleg every twenty-four miles to counter the diminishing distances: grid corrections

light graffiti is a custom made video technique developed by michal osowski, to convert specific patterns of physical movement through 3-dimensional space into a 2-dimensional projection. _light traces are used to visualize the manifestation of the moving body. _the moving performer carries small led-lights attached to her hands, legs, head or other parts of the body. _a computer program tracks her movements with a camera and converts the trajectory of her body parts into a light pattern which a beamer projects on the virtual ‘canvas’ of a flat surface. _as the performers’ movements are turned into real-time projected light images, she can view the effect of her actions as if reflected in a mirror. _the leading idea of the project is oriented to reaching a state of perceptual feedback: the lasting loop between the locomotor system and senses that occur when the sensory system is triggered by a movement, and the perception of that movement evokes a new movement which, once perceived, induces a next movement etc., in an everlasting loop. _the process can be continued without interruption for any period of time. _the traces of light gradually disappear to be replaced by new ones. _subsequent images gradually interpenetrate each other creating a dynamic and unpredictable narrative. _when the movement of the performer is interrupted, the image gradually blacks out 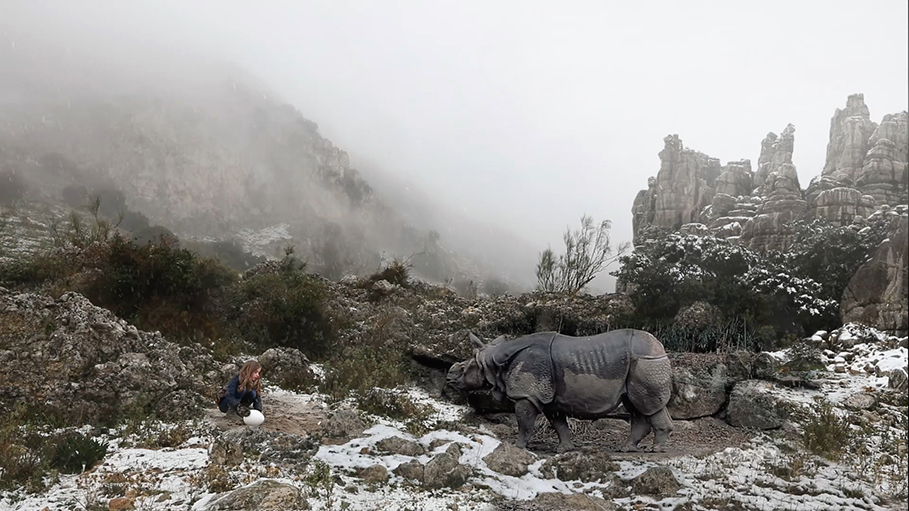 if both child and animal are associated with innocence and the ability to live in the here and now, what does it then mean, when this animal forms a traumatised neurotic shadow of its own bestiality?

in guardian, a girl and a rhinoceros face each other in a fairy-like prehistoric landscape. _the rhinoceros follows every movement the girl makes, but the girl is so caught up in digging up eggs, that she hardly notices the rhinoceros. _guardian is the second video work of the quadriptych time, in which nature, the animal and the child are brought together. _the works form a window to an archaic world. _although it is a peaceful world in which animal and child coexist, they seem alienated from their environment and each other, situated in a meticulously constructed diorama. _guardian raises questions about survival and surviving, about temporality and eternity, about vulnerability and innocence 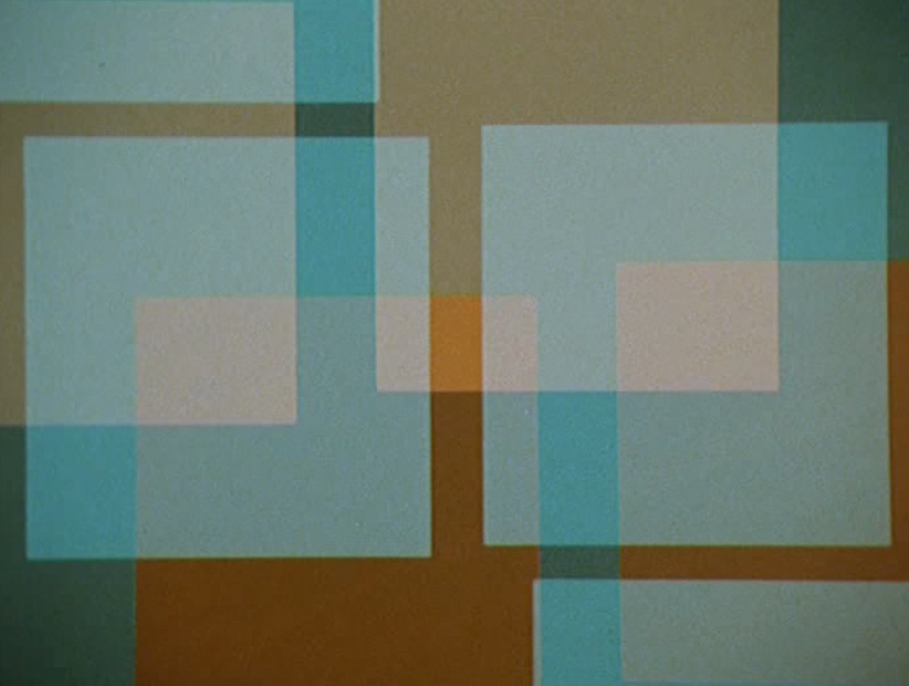 cut-out animation consisting of four parts, each of which depicts its own abstract variation on the themes of color and movement.

bart vegter (1940-2011) was self-taught and derived his primary inspiration from the methods of filmmakers such as frans zwartjes and paul de mol, and experimental cinema from the seventies and eighties. _before starting to shoot abstract films at age of forty, bart vegter graduated from the eindhoven university of technology and worked at the laboratories of shell and philips. _his oeuvre may be modest in size, but it excels in its eye for detail and craftsmanship. _during his early years, he worked with traditional animation techniques. _however the last few films such as NACHT-LICHT [NIGHT-LIGHT], SPACE-MODULATION and FOREST VIEWS display a more idiosyncratic style attributeable to the software he wrote

humanoid is a 2d frame to frame animated film with a philosophical attitude. _humanoid explores how our self image as humans is affected by the rise of artificial intelligence. _the project is inspired by the book 'life 3.0' by max tegmark, which gives a mind-blowing view on the possible near future. _form and content are inseparable in this minimalistic black and white film 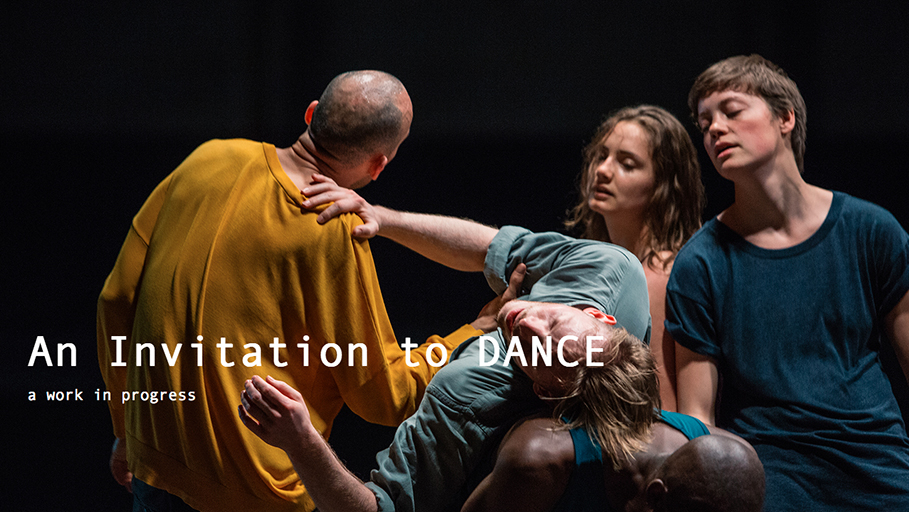 there are five bodies, five individuals, all existing unto themselves. _they cannot stop dancing, that’s what makes them human. _they form an autonomous world that follows its own rules

the fourth episode of off-crimmp_cinema was attended by 60 persons